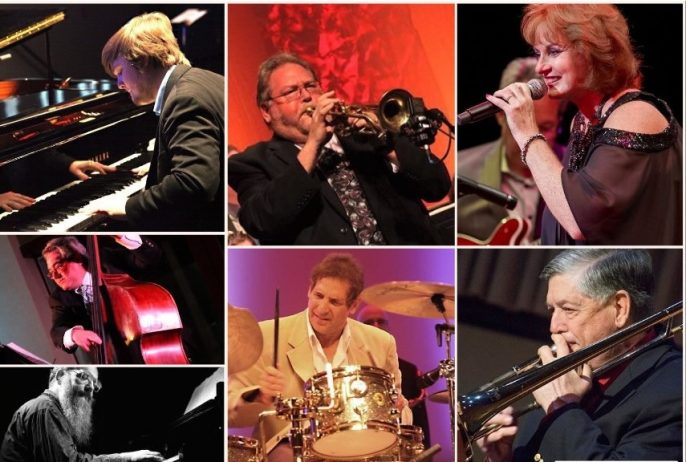 A stellar collection of seven renowned jazz artists based in Jacksonville, Orlando, and Nashville, with years of various memorable playing histories together, who’ve individually traveled the world performing clubs to major festival stages with many notable legends and legendary bands! Connected to the esteemed jazz programs of UNF or UCF, each of these musicians are highly regarded, award-winning, pro-artist/educators. Join them for two special performances presenting creative arrangements of jazz ‘classics’ from the Great American Song Book to their originals, in styles of swing, Latin, 1/2 time grooves, and a taste of New Orleans, to the unique addition of classical music pieces! The 11am concert will feature the jazz-to-classical versatility of 2014 Jacksonville Jazz Festival Piano Competition winner, Jacksonville Symphony pianist, Aaron Lehrian, and the 7:30pm concert will feature pianist Richard Drexler, known for his playing from the Woody Herman Band to works of Brahms, Mahler, and Chopin. This is a rare opportunity to see these artists playing together – don’t miss this special musical event for Friday Musicale!

JB Scott (trumpet) the first graduate of the UNF Jazz Program under Rich Matteson, a former student of Arturo Sandoval at FIU. JB has toured with the Jimmy Dorsey Orchestra, the Ringling Bros. Barnum & Bailey Circus (Japan), and led the legendary Dukes of Dixieland for three years in New Orleans, featured on several CD’s and on the PBS special “A Salute to Jelly Roll Morton,” and performed with Skitch Henderson and the New York Pops at Carnegie Hall. He has performed with many notables including Al Hirt, Paquito D’Rivera, Jeff Hamilton, Ed Calle, Lynn Seaton, and Tim Hagans. JB is an Assoc. Professor of Jazz Studies in his 21st year at UNF, Coordinator of Jazz Studies, and Director of the Great American Jazz Concert Series, teaching trumpet, various music courses, and directing the UNF JE I big band. A Warburton Trumpet Artist/Clinician, he is much in demand as a free-lane artist, adjudicator, and guest artist performing throughout the U.S, Europe, and Canada, co-leading groups since 1997 with jazz vocalist Lisa Kelly and co-releasing 6 acclaimed CD’ projects. JB has presented jazz clinics for major music conventions, directed UNF JE 1 on Europe festivals and in China. He is one of 120 international artists profiled in the book, “The New Face of Jazz,” and the Jacksonville Jazz Festival “Hall of Fame” 2017 inductee.

Dave Steinmeyer (trombone) 28 years playing in the United States Air Force, with 24 playing lead-trombone with the world-famous Airmen of Note (the big band started by Glenn Miller) and the last 10 years as the director. He traveled to Los Angeles 3 times a year to record albums with legends including Sarah Vaughn, Joe Williams, Rosemary Clooney, Frank Sinatra, Patrick Williams, J.J. Johnson, Lou Rawls and Diane Schuur. Dave has guested as a performer and clinician for major universities, performed for 8 U.S. Presidents, and appeared in the movie, “A Few Good Men.” World-wide performances include the Sydney Opera House in Australia, the Kennedy Center, the White House, on many TV and radio shows, and studio projects. Receiving the Lowell Mason Award for Education, Dave has taught privately, for jazz camps, and college music programs, is the jazz trombone professor at UNF. He’s on the Kelly/Scott ‘Renditions’ CD.

Richard Drexler (piano) a multi-instrumentalist, composer/arranger, Richard is the bass professor at UCF, teaching various jazz courses. He has toured regularly with the Jeff Berlin Trio, the Woody Herman Orchestra, and Kenny Drew, Jr, and with many vocalists including Mel Torme, Tony Bennett, Al Jarreau, Vic Damone, and Connie Frances. Richard has been featured on many recordings from salsa to avant-garde to country-western. He assisted guitarist/composer/producer Richie Zellon on much of the Songosaurus label catalog of jazz fused with South American rhythms, and recorded with Bob Mintzer, Paquito dRivera, Jerry Bergonzi, Gato Barbieri, Claudio Roditi, and Alex Acuna. Richard produced his first album of originals, Flaming Spirit, in 1978 with Dave Liebman, Tom Harrell, Steve la Spina and Clay Hulet, enjoying favorable reviews in Jazz Times, Down Beat, Jazz Improv and Jazziz magazine. A major direction in his music has been combining classical music with jazz and Latin forms, as in his Songosaurus CD Senor Juan Brahms and arrangements of works by Mahler, Chopin and other composers

Aaron Lehrian (piano) just 24 years old, already achieving numerous major credits towards his budding career. He was awarded a full scholarship at the Ruth Eckerd Hall jazz program, winning the Walker’s Rising Star Competition, the Justin LeBaron Young Artists Competition, and in 2014, winning the Jacksonville Jazz Festival Piano Competition. Playing each year in the top jazz combo, and in flagship UNF JE 1, Aaron earned his undergrad in jazz studies at UNF in 2017, playing 1 more year afterward as a featured alumni artist with the band. He has already played on many major U.S. and international stages, including the North Sea, Montreux, Umbria, and Vienne Jazz Festivals, FMEA and JEN music conferences, for many jazz society venues and jazz clubs. Aaron mentors other players, is considered a noteworthy arranger/composer with many works performed at major venues, has already written a music theoretical book, and will be soon be releasing a debut CD recording. Equally proficient in classical repertoire, he is a pianist with the Jacksonville Symphony. Aaron appears regularly with vocalists Lisa Kelly, Linda Cole, and others artists.

Dennis Marks (bass) one of the most in-demand bassists on the jazz scene today, touring the world many times over. Bassist for 19 years for trumpeter Arturo Sandoval, Dennis has performed and recorded as a top-call for Dizzy Gillespie, Dave Liebman, Bob Mintzer, Meynard Ferguson, Pat Matheny, ED Calle, Bunky Greene, and many others. He has appeared on six of Sandoval’s CD recordings, including the Grammy-Award Winning, “Hot-House, and on “My Passion for the Piano,” writing two of the compositions. In 1996, Dennis recorded his debut album “Images,” containing all original compositions, receiving much critical acclaim, and in 2013, played in the White House with Arturo Sandoval who received the Presidential Medal of Freedom. Dennis is the bassist for the annual Jacksonville Jazz Festival Piano Competition and festival’s official Jam Session. He has appeared on many recordings, including the Lisa Kelly/JB CD ‘Renditions: the Summer Sessions.’ Teaching formerly for 9 years at FIU in Miami, Dennis has been the bass instructor at UNF for over 15 years, teaching composition and directing the UNF JE II big band.

Danny Gottlieb (drummer) – known world-wide as one of the top drummer on the scene, Danny is a member of the famed Gary Sinise Lt. Dan Band with his percussionist wife Beth since 2004, performing 30-40 performances a year for our military troops and families. Danny has performed on over 400 CD’s, with 9 Grammy nominations, 4 of them award winners. He has performed and recorded as part of the Pat Matheny Group, the Mahavishu Orchestra, Gil Evans Orchestra, Carnegie Hall Jazz Orchestra, NDR Big Band, Flora Purim Group, and with numerous other legendary music luminaries including Sting, Chick Corea, Bill Evans, Herbie Hancock, Gerry Mulligan, Branford Marsalis, Mark Murphy, Randy Brecker, and Gary Burton. He is a clinician endorser for Zildjian, Remo, and other music companies, has released 12 educational DVD’s, and authored several best-selling drumming text books. Danny has served as the drummer for the Jacksonville Jazz Festival Piano Competition for years and often with the festival’s official jam session, hosted by Lisa Kelly. He is the full professor of jazz drum-set studies at UNF.