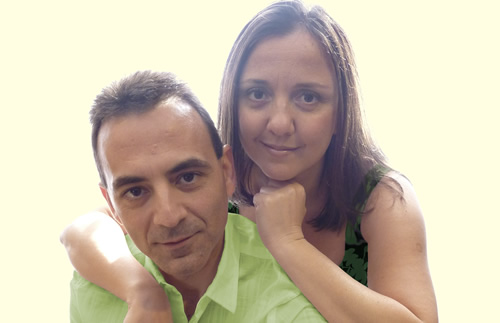 Spanish born duo-pianists ELENA MARTÍN and JOSE MELITÓN have been hailed by critics and audiences alike as one of the most compelling talents of their generation. These pianists emerged as one of the main references within the realm of Spanish two-piano music, thanks to their “playing in perfect synchronization and with hypnotic poetry…sharply chiseled refinement, fierce commitment, and palpable charisma” (John Salmon, American Music Teacher’s Magazine, U.S.A.), and their “combining a sensitivity of interpretation with their magnificent technique. Bravo!” (Joaquín Rodrigo. Madrid, Spain). The duo Martín-Melitón has conquered the most critical audiences in the United States, Europe and Asia. Their numerous collaborations with Spanish Embassies and cultural institutions throughout the world, makes them the Ambassadors of two-piano music from Spain.

One of the main characteristics which makes this duo unique in the world and keeps it constantly touring is Elena Martín’s own compositions. Mr. James Harrington, on the internationally known American Record Guide, writes: “The duo’s ensemble is impeccable…dead-on perfect…their music turns my home into a little corner of Spain every time I play it…these are true sound pictures…Albéniz and Falla are among the greatest composers born in Spain, as is Elena Martín…Martín’s compositions display far more than excellent craft; she has creativity and originality…Their recordings capture every nuance of this great duo’s performances…Martín, the composer, could never hope for better performances of her work.”

Ms. Martín’s compositions and transcriptions are now available to the public through her newly founded publishing company Ediciones Elena Martín. Manuel Albacete, a critic from Cleveland, Ohio, who saw them perform, once said: “The two revealed at once their sense of unity, two bodies playing as a single mind and spirit. Occasional glances across the pianos were all that were necessary to keep them perfectly synchronized…This duo’s own compositions for two pianos are superb…This duo beats out all the competition!

Since their powerful appearance at the MTNA National Convention in Los Angeles, the duo has received enthusiastic acclaim as guest artists in Festivals, Concert Series, Master Classes, and Workshops, in more than thirty five states in the U. S. alone, at prestigious Universities, as well as in fine Halls throughout the world, including International Artists Series-University of New Orleans, Virtuoso Piano Series at Town Hall-Seattle, Loke Yew Hall-Hong Kong, Martin Luther King Jr. International Chapel-Atlanta, The Doris Duke Hall at the Honolulu Academy of Arts-Hawaii, Lantaren Venster Theater-Rotterdam, The Netherlands, Mechanics Hall-Massachusetts, Woodstock Opera House-Chicago, The Detroit Institute of Arts-Detroit, Constance Pilkington Hall-London, England, The National Gallery of Art-Washington, DC, the Round Top Festival Institute, Houston, or the Segerstrom Center for the Arts, Santa Ana, California, to name a few.

Spain’s Ministry of External Affairs proudly supports many of their artistic endeavors, including the recording of their CDs “Duende”, “Jaleo”, “Bougainvilleas of the Soul”, “Candela”, and “Among Lemon Trees”, on the Centaur Label, which have been featured on prestigious music magazines such as American Music Teacher (U.S.A.), and Música y Educación (Spain). Mr. Harold C. Schonberg, Pulitzer Prize winner as Chief Music Critic for the New York Times, on the internationally known American Record Guide, writes: “Two fine professionals, enjoying themselves, play with strong rhythm and unusual clarity…outlines are clear, passages work precise…they produce a nice, resonant sound…Martin and Meliton know exactly what they are doing.” The artists plan on recording more of their compositions on their next CD.

Ms. Martín and Mr. Melitón both hold the Título Superior de Piano from the Real Conservatorio Superior de Música de Madrid, as well as Master’s degrees from The University of North Carolina at Greensboro. Ms. Martín and Mr. Melitón also perform standard repertoire both as a duo as well as with orchestras. On one of their orchestral appearances performing Mozart’s Two-Piano Concerto, K. 365, Pierre Kenyon writes: “The phrasing of the pianists playing by themselves and with the orchestra accompanying them was exemplary…like a sweet conversation…lively and delightful…I believe that Mozart and his sister would have been delighted to have heard this fine performance by Martín and Melitón, which I had the privilege to attend.” (The Chieftain, Colorado)