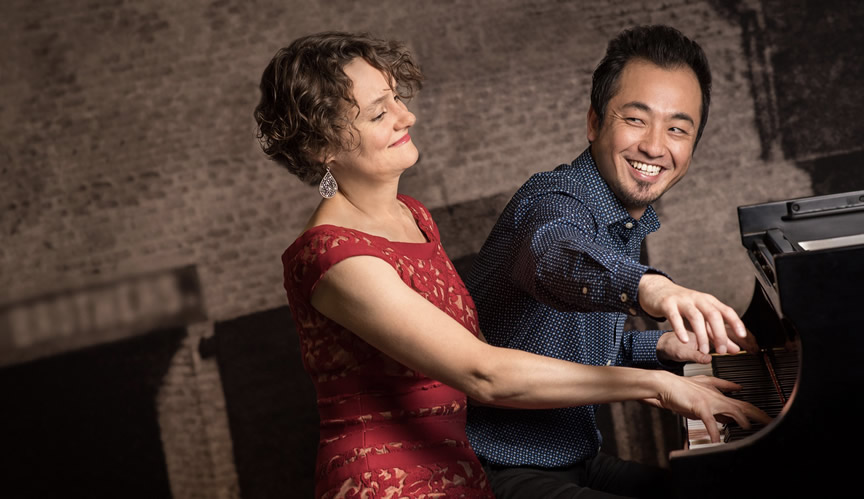 Friday, March 6, 2020 – 11:00am and 7:00pm
Since joining forces as a professional duo in 2009, internationally acclaimed solo pianists Eva-Maria Zimmermann and Keisuke Nakagoshi—ZOFO duet—have electrified audiences from Carnegie Hall to Tokyo with their dazzling artistry and outside-the-box thematic programming for one-piano-four-hands. This Grammy-nominated, prize-winning Steinway Artist Ensemble—one of only a handful of duos worldwide devoted exclusively to piano duets—is blazing a bold new path for piano four hands groups by focusing on 20th and 21st century repertoire and by commissioning new works from noted composers each year.

ZOFO, which is shorthand for 20-finger orchestra (ZO=20 and FO=finger orchestra), also performs heart pumping duet arrangements of famous orchestral pieces such as Stravinsky’s Rite of Spring, exploring the realms in which many composers first experienced their symphonic visions. They believe that the piano duet is the most intimate form of chamber music, with two musicians playing individual parts on one instrument in a complex, often beautiful choreography of four hands.

ZOFO’s concert programs often incorporate a unifying theme that connects the works both musically and historically. Several of these thematic programs have been released worldwide as critically acclaimed commercial CDs under their multi-disc recording contract with Grammy Award-winning Sono Luminus Records. Their 2013 debut CD, Mind Meld was nominated for two Grammy Awards for Best Chamber Music/Small Ensemble Performance and Producer of the Year.

ZOFO made its Carnegie Hall debut in 2010, the same year they won the Bradshaw & Buono International Piano Competition. ZOFO was the only piano duo to be elevated to the final round in the 2011 Osaka International Chamber Music Competition. They have performed at a wide variety of concert venues across the U.S., Europe, and Japan, including intimate, informal spaces, colleges and universities, and major concert venues such as the Tokyo Opera Recital Hall and Tonhalle Zurich.