Sandra Lopez and Paul Posnak – From Cuba to Broadway 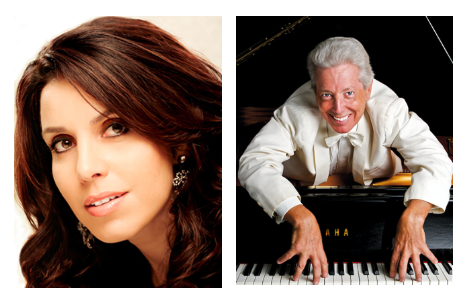 Sandra Lopez is one of the most sought-after sopranos in the opera world.  Ms. Lopez has performed on the world’s great stages, including recent performances with Finnish National Opera, Opera de Oviedo, and Opera på Skäret in Sweden – sing the title role in TOSCA.  She performed at Venice’s Gran Teatro la Fenice, Opera Carolina, Florida Grand Opera and Fort Worth Opera as Mimi in La Boheme, Opera de Massy, Virginia Opera, Berkshire Opera, Opera de Fribourg in Switzerland, Festival de St-Cèrè, and Opera Eclatè singing the title role in Madame Butterfly.  Other performances include Opera Carolina as Desdemona in Otello, Cincinnati Opera, Fort Worth Opera, San Antonio Opera, Connecticut Grand Opera, PORT Opera in Maine, Florida Grand Opera, Palm Beach Opera, and Opera North as Micaela in Carmen.  She performed with the San Antonio Opera singing the title role in Suor Angelica, Nedda in I Pagliaco and Micaela in Carmen, the Salzburg Festival, the Verbier Festival in Switzerland, the Tanglewood Festival, and the Metropolitan Opera as the 4th Main in Elektra.

Ms. Lopez has toured with Andrea Bocelli to critical acclaim and has performed a wide variety of repertoire with various festival and symphonies, including the Nürnberg Symphoniker, Orquesta Nacional de Puerto Rico, Fort Worth Symphony, Las Vegas Philharmonic, Greensboro Symphony, Manchester Festival Orchestra, Miami Chamber Society, among others.  Ms. Lopez is also a lover of Spanish song repertoire and Zarzuela, and regularly performs concerts, recitals, galas, and fully-staged performances of this unique repertoire.

“Sandra stole the show with her acting, her musical singing and her incredibly expressive facial expressions.  That is something opera singers often can’t do at all.  After all, when you are singing music as strenuous as opera, you are lucky if you can throw in an arm gesture every now and then.  But, Sandra’s eyes and smile lit up the stage all night.” – San Antonio Observer

Paul Posnak in an internationally recognized concert pianist, recording artist, transcriber and teacher.  He has performed at the White House, the Kennedy Center in Washington, D.C. as soloist with the National Symphony Orchestra, and to great acclaim at Carnegie and Tully Halls, in a special recital for the U.S. Supreme Court, and throughout Europe and Asia.  Dr. Posnak is the recipient of the Loeb Prize (the highest award at the Julliard School of Music), and First Prizes in the Intl. J.S. Bach Competition and the Concert Artists Guild Competition.  He has collaborated with world-renowned vocalists such as Luciano Pavarotti and Jennie Tourel – with many chamber ensembles such as the Emerson, Fine Arts, Vega, St. Petersburg, Bergonzi, Portland and Amernet String Quartets.  His 18 recordings of solo and chamber works for EMI, Naxos, Vox, Yamaha Disklavier, Arabesque, Centaur and Cambria have received highest critical praise.

Dr. Posnak is renowned for his improvisations and transcriptions of the unpublished brilliant solo improvisations of George Gershwin and Thomas “Fats” Waller from the old recordings and the radio broadcasts.  His transcriptions of 16 of the “Fats” Waller’s greatest solos are published by Hal Leonard.  His Arrangements of Four Gershwin Songs for Two Pianos have been published by Alfred Music, and his arrangements of the Canzones of Ernesto Lecuona, “To Lecuona With Love”, were just recorded and published by Hal Leonard.  Dr. Posnak is Professor Emeritus of Keyboard Performance at the University of Miami, and recipient of the UM Excellence in Teaching Award.  He is the Founding Artistic Director of the Martha/Mary-Yamaha Concert Series, and President of the Miami Music Teachers Association. –