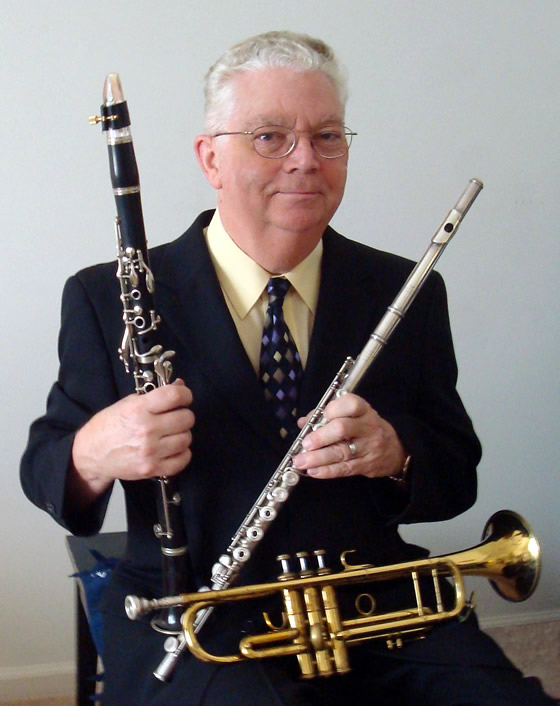 Concert is Free & Open to the public.  Donations Appreciated.

Bill Prince, a professor emeritus at the University of North Florida comes from a background rich in music. He has performed with numerous bands and orchestras including Buddy Rich, Billy Maxted, Pee Wee Hunt, the NORAD Band, the Denver, Ft. Lauderdale, Palm Beach, and Jacksonville Symphonies, and the American Wind Symphony Orchestra. He has also performed with a number of well-known big bands including Xavier Cugat, Ray Anthony, Tex Beneke, Les and Larry Elgart, Harry James, Tommy Dorsey, and Louis Bellson. He has appeared on TV shows in the United States, Canada, Japan, the Philippines, Costa Rica, Colombia, and Ecuador. Bill has performed on over 70 albums including his The Best Kept Secret in Jazz. He can currently be heard on Duffy Jackson’s CD, Swing! Swing! Swing!, Buddy Rich’s CDs, Mercy Mercy, and The Best of Buddy Rich. In more recent years Bill has developed a cabaret show that he performs on cruise ships around the world.

One of Bill’s most unique talents is his ability to perform professionally on several instruments. For example, although he played trumpet with Buddy Rich, he was first offered a chair in the saxophone section. His performing instruments include trumpet, flugelhorn, trombone, flute, clarinet, saxophone, piano, and electric bass. Bill produced his own CD, Happy Thoughts, on which he composed, arranged and performed all parts.

Bill holds the Doctor of Musical Arts degree with a major in Theory and Composition from the University of Miami. He has taught at Florida Atlantic U, the U of Colorado/Denver, St. Francis Xavier U, Nova Scotia, the U of North Florida, and served as a visiting lecturer at Cape Town U and Natal U, South Africa. Music has taken him to all 50 states and 81 countries of this world.

Bill has received Undergraduate Teaching and Outstanding Teaching Awards and student groups under his direction have twice won national Jazz Band competitions. He was also awarded first place in an IAJE Jazz Composition Contest. Bill’s compositions and arrangements have been performed and recorded by professional, college and university jazz ensembles throughout the United States and Canada. In 2000, his Concertino for Jazz and Legit Clarinets was recorded by the Warsaw (Poland) National Philharmonic and is available through ITunes and Ravello Records.

Music Is My Ticket, a chronicle of Bill’s musical life, written with Vic DiGenti, is available on Amazon.

Jeff Phillips, originally from Naples, Florida, has lived and worked in Central Florida for the last 25 years. A self-taught pianist and organist, he received his first musical instrument before age 6 and by age 8 was able to copy songs from his grandparents 78 RPM record collection on the organ. Jazz piano came into his life at age 18 after being gifted two albums: Oscar Peterson’s “Night Train” and Erroll Garner’s “Concert By The Sea”.

Jeff had a pure “bandstand” education, learning songs from every era of American popular music and music of other countries, with a particular fascination with Brazilian music. He was with Disney World from 1997-2020 where he played in 10 different groups, playing everything from early Jazz to German Folk Music. He has been in particularly high demand throughout his career for being a consummate rhythm section player, always more interested in being a proper accompanist than a soloist.

Jeff is currently an adjunct teacher at both The Harrison School For The Arts and Polk State College in Lakeland and Winter Haven respectively.

Jeremy Smith (drums) grew up in a musical home of professional jazz musicians, his mother vocalist Lisa Kelly and his step-dad trumpeter JB Scott. He won many music recognitions throughout his academic years while attending two highly regarded programs and performing with the top jazz and concert bands at LaVilla Middle School of the Arts and Douglas Anderson High School of the Arts. He was co-drummer of the Grammy award winning D.A. JE I big band featured in the documentary Chops which won first place in the 2006 Essentially Ellington Competition in New York City, was awarded “Best Drummer” of that same competition in 2008. Jeremy performed in various district honors ensembles and was selected for the 2008 FMEA All-State Jazz Band. Performing professionally by the age of 17, Jeremy played in church bands, on music videos and recordings with various regional small groups and big bands, including his parent’s professional jazz groups, and with the historic St. Johns River City Big Band. He was invited to perform as the featured guest drummer in 2008 with an Orlando all-star big band at the legendary Monterey Jazz Festival in CA. Jeremy was given a full scholarship award to attend FAMU, playing with the top JE 1 jazz ensemble and with the faculty combo, before enlisting in the USMC, graduating from the Navy School of Music. Stationed in New Orleans, he was the drummer for the USMC (Jazz) Band of New Orleans, percussionist with the concert band and marching band, performing on more than 250 concerts, TV, parades, with appearances and ceremonies around the country, that included concerts with jazz notables Ellis Marsalis, Wynton Marsalis, Irvin Mayfield, and others. Jeremy also performed with various pro groups in the many venues around the New Orleans region. He was given leadership rolls, attaining the rank of sergeant, returning to his hometown of Jacksonville, FL after his service to earn a bachelors and masters degree in business at the University of North Florida. Jeremy’s busy schedule includes work and travel in helping displaced veterans through the non-profit, Patriot Services Group, which he helped to co-found, and as a top call drummer.

Bassist Ernie Ealum been performing in the southeast for over 35 years.  He is originally from Newport News, Virginia but relocated to Orange Park, Florida in the early eighties.  Ernie is a Jacksonville University alumnus and also studied at the University of Florida and the University of North Florida.

Ernie has been teaching upright and electric bass in the Jacksonville area for over 25 years, maintaining his longtime studio at Nice Music in Orange Park, Florida as well as teaching for the Ronan School of Music in Jacksonville.  In addition, he has also been the adjunct bass professor at Florida State College at Jacksonville since 2002.

Ernie works as bassist with many musicians and bands in the North Florida and South Georgia areas covering all genres.  He was the staff bassist at the Cloister at Sea Island, Georgia for 10 years and has worked with artists as diverse as The Platters, Michael W. Smith, Percy Sledge, the Cox Family and Stanley Jordan. Ernie currently lives in Fernandina Beach, Florida and is the co-owner of wedding and music event coordinator business Music by Pegge, LLC which provides music for weddings, corporate, and various events up and down the east coast.