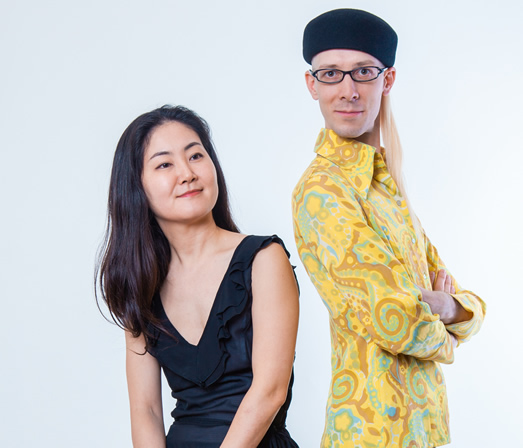 Sunday, May 31, 2020 – 3:00pm
The Arte Animi piano duo performs over 10 years with more than 600 concerts in Europe, Asia and America including major concert venues such as the Carnegie Hall New York, Suntory Hall Tokyo, Opera City Tokyo and Tonhalle Zurich. They played as soloists, inter alia, with the Southwest German Philharmonic the Concerto for two pianos from Poulenc. Their concerts have been broadcast by numerous radio and TV stations. The documentary «La vie en bi» about one of the piano duo’s japan tour will be released 2019.

Along with their studies in Lausanne, Bern, Paris, Brussels and Japan the Duo gained additional momentum through their collaboration with Aleksandar Madzar, Brigitte Meyer and Christoph Poppen.

Munehisa and Fried regularly give master classes and have been invited to serve as jury members in international competitions.
The international press have referred to the Duo as «a major discovery in the world of classical music», and named it as a «Duo with world-class form.» «The Arte Animi pianoduo impresses the listener with its sensitivity to musical phrases, thrilling temperament and consistency in presenting musical ideas. Their playing is inspired and sensitive in its expression.»

The piano duo was named to be an ensemble in the exclusive circle of Steinway Artists.