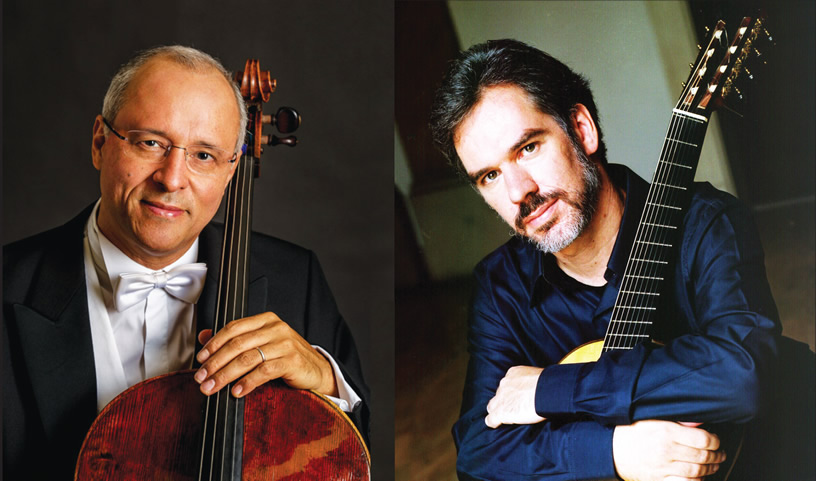 Friday, March 27, 2020 – 11:00am
Antonio Meneses was the cellist of the legendary Beaux Arts Trio from 1998 through the Trio’s retirement in 2008. He won First Prize and Gold Medal at the 1982 Tchaikovsky Competition in Moscow.

Paul Galbraith, a GRAMMY-nominee and Billboad Top-10 artist, is internationally renowned as one of the foremost guitarists of our time. The depth of his interpretations, along with his revolutionary 8-string instrument and cello-like playing position, have made him an instantly recognizable figure in the world of classical music.

The Brazilian-born Meneses, and Galbraith (who lived many years in Brazil, where he founded the Brazilian Guitar Quartet), met in Basel, Switzerland, where they both were living, and quickly decided to form a duo. Their premiere U.S. tour, in 2018, included concerts in Detroit (presented by the Detroit Chamber Music Society), a west coast début on the San Francisco Performances series in the 850-seat Herbst Theatre, and performances in La Jolla and other cities. Their 2019-20 season includes a New York début at the Frick Collection, a Washington DC début at Strathmore, and a tour of Florida including Miami, the Naples Opera House, and other cities.

Highlights of the duo’s repertoire include Schubert’s Arpeggione Sonata; the Aria from Villa-Lobos’ Bachianas Brasileiras No.5; and “Five Places from an Imaginary Brazil,” written for them by the acclaimed young Brazilian classical-jazz composer André Mehmari.