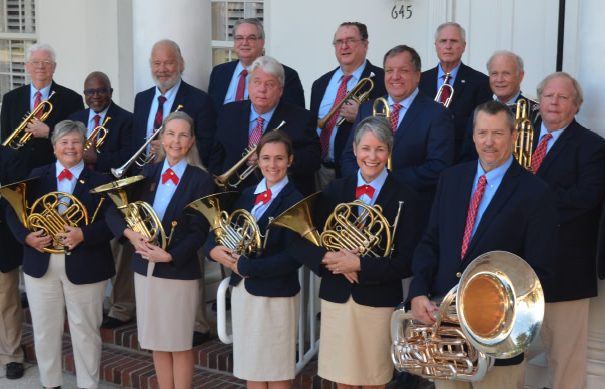 Founded in 1980, the Ancient City Brass Band is proud to partner with Friday Musicale in Jacksonville, Florida to bring quality music to the greater Jacksonville community and beyond. Membership for the ensemble draws upon musicians from across Northeast Florida and is comprised of professional musicians, retired music teachers, and other fine players. From its inception, the band has always been a volunteer group, performing in concert and often in support of other organizations at a variety of events and official functions. The collective spirit of the band is based on the simple joy of making good music together.

The Ancient City Brass Band is a continuation of one of the oldest historic brass bands in Florida, the 3rd Florida Regimental Band. Over the years, the Ancient City Brass Band has modeled itself after a variety of different types of brass ensemble genres. Early on, the ensemble modeled itself after British Brass Bands; historical brass ensembles and traditional brass quintets and quartets that use historic valved instruments from the Civil War era. British brass bands are typically comprised of up to 20 instruments while their American counterparts were normally smaller, around 12 instruments. Some other changes were that American brass bands used F-Flat French horns where British had E-Flat Baritone horns. Small differences here and there, but certainly ones that distinguished the flavor of music.

Today, the Ancient City Brass Band plays neither all British nor all American music and they play on contemporary brass instruments used on both continents. Since 2019, our conductor Dr. Eric A. Becher has expanded the repertoire to include music from a variety of genres and periods. The goal of the Ancient City Brass Band focuses on continuing the tradition of remaining a respected brass band which performs great music at a high level while partnering with our community by providing inspiring concerts and music education programs.

Interested musicians should contact Cliff Newsome at 904.783.0052 or email him at chnewton@comcast.net for more information. To inquire about a concert, please contact Dr. Becher at eric@fridaymusicale.com or speak with one of the Board members listed below.